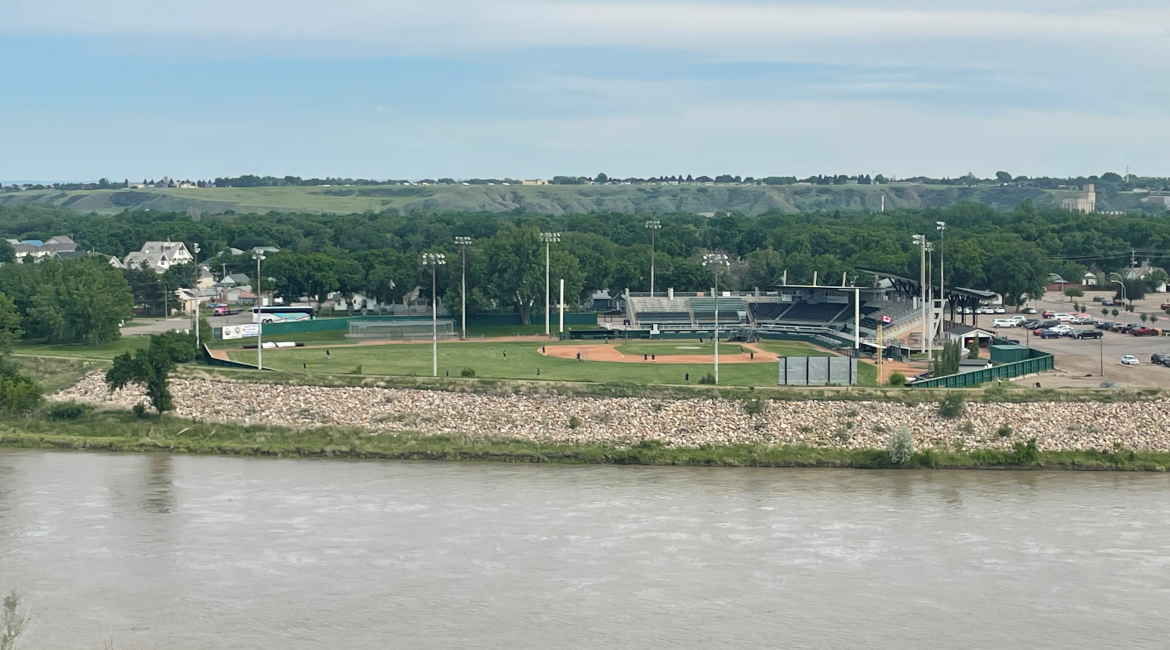 Other teams in the WCBL have discovered that the construction of entire stadiums or major sporting complexes may not be necessary, but renovations and yearly improvements are key to providing the best experience to players, coaches and baseball enthusiasts.

The Medicine Hat Mavericks opened their gates to an upgraded Athletic Park this summer.

Originally built along the banks of the South Saskatchewan River in the late 1970s, the ball diamond has endured a lot over the decades, including major damage from flooding in 1995 and 2013. But the bones of the stadium – which has the capacity to handle 2,300 people – have withstood the test of time and some recent tender loving care has the ballpark operating at optimal levels.

The $3 million in upgrades include the addition of a shade canopy; the introduction of field-level seating behind home plate and along the base lines; a brand new ticket office and general store; the construction of padded dugout railings; as well as enhanced fencing, brick work and freshly paved walkways to greet the fans as they enter Athletic Park.

“It really is the fans that make a go of these organizations, and just from improving the approach and aesthetics to the stadium and getting the shade canopy to support those rainy and sunny days. I think our fans have really shown that they enjoyed the improvements,” Greg Morrison, the owner of the Mavs, told Chat News Today.

The Lethbridge Bulls went through a similar phase of transformation a few years ago with their home at Spitz Stadium.

The first phases of the project called for upgrades to the stadium exterior and walking areas, as well as public washroom renovations and dugout improvements. A new press box and broadcast booth was also built, a first aid room was constructed and the umpires got a refurbished change room, as well.

The major addition during the renovations involved the construction of an upper-level concourse, improvements to concessions spaces and the installment of an elevator to allow for better access to the upper concourse.

“I think it’s going to give them a better experience. When you come to a ball game, it’s not just about the ball game, it’s about visiting with friends and having some refreshments and some food and a fun enjoyable time,” Lethbridge Bulls president Kevin Kvame told Global News following the upgrades.

“This is going to give them a lot more space in the stadium – a lot more viewpoints.”

ALL THE SMALL THINGS

No matter how seemingly minor the ballpark upgrade, all teams in the WCBL have embraced a vision of season-to-season improvements in an effort to deliver memorable summer experiences for fans.

The 57’s reached a deal with Swift Current city council in 2018 on the construction of a $500,000 clubhouse facility at Mitchell Field. That building includes home and visitor change rooms, an umpire room, public washrooms, office space, a food and drink vendor area and a roof-top patio for fans.

The Moose Jaw Miller Express created a better beer gardens at Ross Wells Park this offseason and put fresh coats of paint on stadium walls, the grandstand and on outfield fences. Team operators also updated some of the seating, fixed fences and put new pavement throughout the concourse.

At Elks Field in Brooks, the Bombers added a “Flight Deck” patio above the home team’s dugout on the third-base side. Such a move improves seating options for spectators and boosts capacity by 100 people. Another patio project along the left-field fence will be completed in 2023.

Meanwhile, Tom Laing Park is receiving a $50,000 injection for the home of the Weyburn Beavers. Improvements are being made to facility siding, walk-in doors, the press box and the internet connection.

In total, the WCBL is helping spur an investment of over $100 million in baseball, sporting and entertainment infrastructure in Western Canada.

These stadiums and facilities – many of which have already been built, some which are currently under construction and others that have yet to be given the green light – are a living legacy for athletics in Alberta and Saskatchewan. They provide a home to the WCBL, which in turn inspires young baseball players to pursue their academic and sporting dreams. They also accommodate tournaments and baseball camps for kids of all ages. They provide invaluable community spaces for people to gather, socialize and engage positively with each other.

These ballparks are more than just “sports facilities.” They offer fun in the sun. They provide the best kind of networking events. They are tourist destinations and hubs. They provide a stage to talented athletes.

We built it. And they are coming.