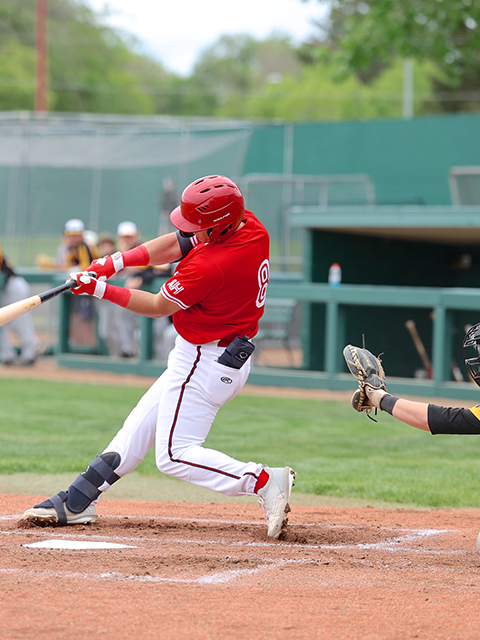 Another night, another blown lead and another loss for the Medicine Hat Mavericks.

The Mavericks led the Moose Jaw Miller Express 6-4 Thursday night through six innings before allowing six runs in the top of the seventh en route to a 10-9 loss.

The defeat marks their fourth in a row and eighth in the last 10 games. Head coach Tyler Jeske said the bloated seventh inning where the Mavs allowed six runs without giving up a hit is the same song just on a different night for a Mavericks team whose record sits at 6-13, putting them in fourth of the WCBL’s East division.

The Mavericks were off Friday before they host the Weyburn Beavers on Saturday and Sunday at Athletic Park.

Jeske said his team needs to just stay the course and stay competitive. He said they show up to work every day and are still a young team.

“A lot of these guys haven’t played a lot of baseball yet, so you’re seeing rookie ball,” Jeske said. “Going back to the Medicine Hat Blue Jays days, you’re seeing rookie ball losses over and over and it gets frustrating. But that’s on us as a staff to continue to really push them to continue to find ways to get better, day by day. Go through all sides of the baseball and find areas where we could have won games.”

Jeske said they’ll be dependent on some of their older players to step up and have a bigger impact to right the ship. He said he’s had conversations with a couple of them about their feelings on where the team is.

“Their leadership, some of them we are dependent on, and so talking to Adrian Salazar, Garrett Nicholson and Hunter Cooper about what do you see, what do you feel, what’s your vibe,” Jeske said.

Jeske reiterated he still firmly believes in the group of players they have and said they will turn it around for the fans who he hopes can see they’re doing all they can to get better.

“I’m still very appreciative of the fans coming out to the ballpark and the only thing I can say is, I really hope they can see we’re doing everything we can,” Jeske said. “We’re working, we’re competing. We appreciate their support and we’re going to turn the corner. I really feel it each night. There is a little, tiny, baby step closer, a tiny baby step closer and it’s (now), let’s take that one giant leap forward.”

Battle of the Badges

Before the Mavericks take on the Weyburn Beavers on Sunday, they’ll host the Battle of the Badges charity softball game at Athletic Park between Medicine Hat Fire and the MH Police Service.

That game gets underway at noon and tickets are $10 with proceeds going to the Root Cellar Food and Wellness Hub. There will also be bins for any fans wanting to bring donations.

Jeske said he couldn’t pick a favourite between the fire or police departments as both are important to the community. He just wants to see a good game of ball.

Tickets purchased for the Battle of the Badges will also gain fans entry to the Mavericks game against Weyburn later that afternoon.