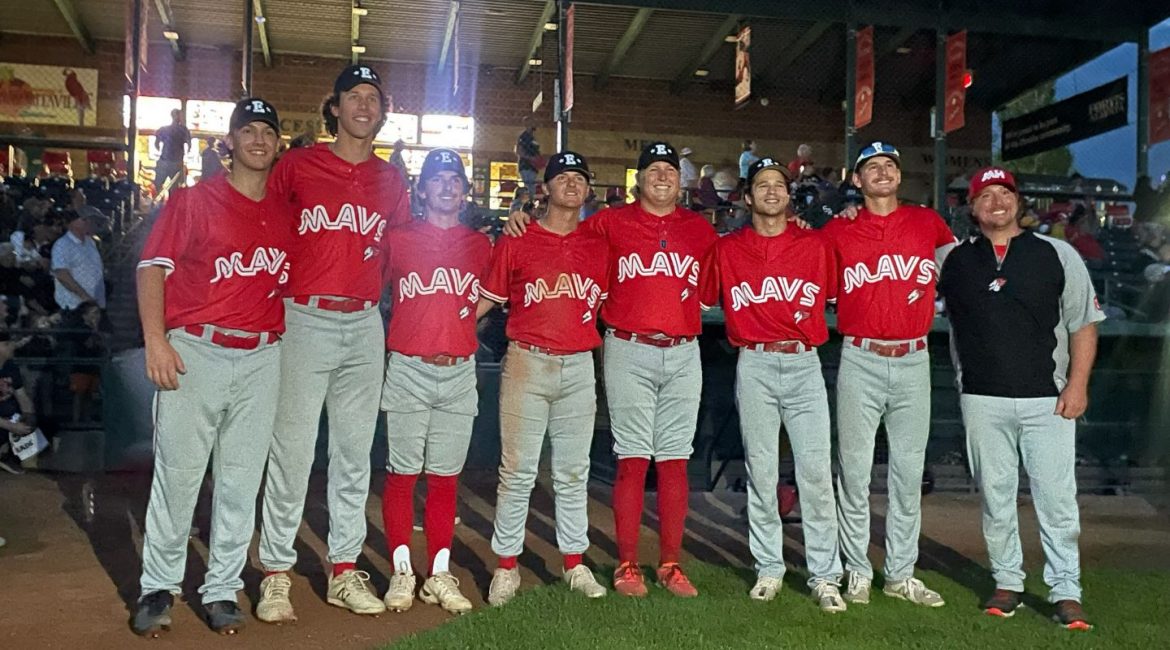 The Western Canadian Baseball League all-star game was beyond positive for the Medicine Hat Mavericks in attendance.

The Mavericks had seven representatives, who all made an appearance in the honorary game held at Seaman Stadium in Okotoks on Saturday, with pitchers Zac Robinson, Hunter Cooper, Nate Ewing and Isaiah Bartels joined by hitters Braden DeSonia, Kellen Williamson and Nate Ade.

The East team lost 9-8 in the 10th inning to the West on a walk-off RBI single from Sylvan Lake Gulls infielder Ethan He. Ewing, who was playing right field at the end of the game, said the day was better than he expected.

“Coming into it, I knew I was going to have fun but having an extra-inning game, having the crowd into it the whole time, not against each other like each team, they were all together,” Ewing said. “I thought it was a lot better than I expected.”

The day started with a round of batting practice for both sides before the home run derby got underway with DeSonia representing the Mavericks. The 20-year-old was unable to register a home run in the derby but said he enjoyed the moment with his dad, Rob, as his pitcher.

“My dad and I always talked about watching the Major League Home Run Derby, so when I got the chance I’m like, Hey, man, you’ve got to come through,” DeSonia said. “It was incredible.”

“When he was a young kid watching the MLB Home Run Derby, I was like, it would be so fun to pitch to your kid and you see it on TV,” Rob DeSonia said. “But even at this level, the WCBL is a great league, I’ve been really impressed. Just to share this with him, even here at this level was phenomenal. It’s a great experience and something I’ll never forget.”

DeSonia was surrounded by his fellow Mavericks reps during his derby time out as they offered him Gatorade and advice. Ade said his focus was on keeping him relaxed.

“I was just massaging to make sure he was staying relaxed, you know we needed him to work there,” Ade said.

The all-star game marked Ade’s last appearance in a Mavericks jersey as the Davis, Calif. product is returning home for the funeral of his aunt. He said Saturday was a special night for himself.

“It was a blast being a part of this atmosphere,” Ade said. “It’s something I’ve never experienced before, I’ve never been at an all star game. It was very special.”

Mavericks head coach Tyler Jeske was also in attendance at the all-star classic and was a part of the coaching staff. He said the day as a whole is something he won’t forget.

“It was extremely memorable,” Jeske said. “Okotoks were fantastic hosts, I had a lot of fun getting to interact and talk to all the teams and coaches that we’ve been playing against all summer. And for one day, we’re not trying to beat each other.”

Cooper had a special night as he pitched two-thirds of an inning before spending the rest of the night at first base. He said he wasn’t expecting to get the chance but appreciated it.

“It was a lot of fun, I wasn’t expecting to do both. I did OK on the mound but getting to go out there and get a couple hits afterwards, makes it just an awesome experience,” Cooper said.

Bartels pitched in the seventh and eighth innings but was busier signing autographs and dapping up fans. “I lost count,” Bartels said about how many autographs he signed.

Williamson, who was in the starting lineup at second base, said the atmosphere and support Saturday was something he enjoyed as they represented the Hat.

“It means a lot to me to be recognized as an all-star and just the chance to represent the city itself like the great baseball town it is,” Williamson said. “I’m thankful for the opportunity to come here and play, it’s been a life changing.”

Like Ade, Williamson is departing the Mavericks as he is leaving Columbia College in Missouri and has committed to Utah Valley, a Division I baseball school, and had to report early.

Robinson joined the Mavericks all-star lineup the morning of, but was just as excited for the moment. Being able to participate in the big game was as special for him as returning to Okotoks for the first time since leaving the team earlier this season.

“If you could tell me at the start of the season, I’d be playing in the all-star game for a team on the East, I would have told you there’s no way. Coming back here, it was kind of like, oh man, we’re coming back,” Robinson said with a smile.

Ewing said he was happy to see how the Mavericks performed at the game.

“We all proved that we can be with these guys that are the best in the league, and to be able to perform the way we did, I thought it was awesome,” Ewing said. “It proves what the Medicine Hat Mavericks have in store for the playoffs.”

The Mavericks were in Regina Monday for a double-header against the Red Sox. Visit medicinehatnews.com/sports for a full story on both contests. They’re back in Regina on Tuesday and Wednesday for two more contests against the Sox.