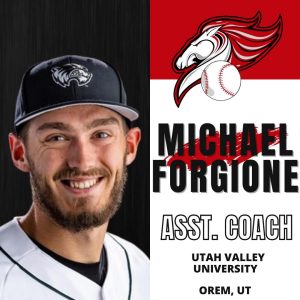 Michael Forgione may be a familiar name for Medicine Hat Mavericks fans.

The 26-year-old played with the Mavericks when they won the WCBL championship in 2014 and was hired Tuesday as the club’s new assistant coach.

He says his first trip through the Hat in 2014 sold him on retiring to the city.

Prior to the start of his coaching career, he was a collegiate player at LCC under Coach Smith and was an instrumental member of the 2015 NWAC championship group that finished 41-10 and ranked No. 10 in the nation for Junior Colleges. As male student-athlete of the year in 2014, he earned First Team All-West Division and Second Team All-NWAC as well as a Gold Glove Award in 2015 at third base.

Entering his collegiate coaching career, he was an undergraduate assistant coach for University of Portland in charge of coaching first base as well as helping with baserunning and infielders in the 2018 season. After the 2018 season, he got hired on at Lower Columbia College where he took control of the baserunning and catching position as well as being the first base coach. A mark on his contribution to the 2019 LCC season, he helped improve two catchers that reached Divisional and NWAC honors as well as recording over 100 stolen bases in a season, something that LCC hadn’t done since his 2015 season as a player.

In his capacity with Utah Valley and with Coach Smith, he will be helping with video, charting, data analysis, and day-to-day operations as the Wolverines head into a new era. He will be studying public administration and will be working towards his graduate degree from UVU.