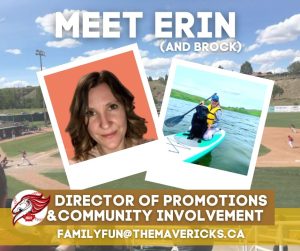 1) What are you looking forward to the most about the upcoming Mavs season?

I am looking forward to connecting with the community again, engaging with them at games and learning more about baseball.

2) What are your favourite hobbies?

I love reading, spending time with my dog, Brock, and being active.

3) Do you have any unique or secret talents?

I took sewing lessons once a week for an hour after school from grade three to grade eight. I am a little rusty now but when I was younger I used to sew some of my clothes.

4) What is your favourite food?

5) Any pet peeves we need to know about lol?

6) Please provide a brief bio about yourself- background, school, sports and/or work

I was born in Calgary but I grew up in Medicine Hat. I was in French Immersion and I grew up playing sports primarily soccer and ringette. I have two brothers and we are pretty close. I took Business Administration majoring in Marketing at MHC while I played soccer there for three seasons. I spent half a year in Australia, attempting to learn how to surf and taking as much in as possible before moving to Calgary where I attended SAIT. I took travel and tourism at SAIT while I used my last two years of soccer eligibility. I ended up living in Calgary for eight years and I was involved with SAIT athletics in some capacity the whole time, either as an athlete, a coach or an administrator. I ended up getting my bachelor degree in Arts through Athabasca in 2012. I volunteered for the 2014 U20 Women’s World Cup that was hosted in Canada as a team liaison officer. I worked with Team Canada and got a chance to get to know some of the players that were on the Olympic Gold Medal team. In 2015, I volunteered as a team liaison officer again for the Women’s World Cup and I worked with Team USA that time. They went on to win the World Cup so that is one of my favourite sporting memories. I moved home in 2017 after spending eight months taking classes in San Francisco. I took my 200 hour yoga teacher training locally and finished in December 2017 right before I started working for the Tigers. I was the Communication Manager for the Tigers for three seasons which was a lot of fun getting to know the players and then taking them to community events. I got my dog, Brock, in 2018 and he is an English Lab who loves the water, so I take him paddleboarding with me whenever I can in the summer, and he keeps me active in the winter since he loves the snow.