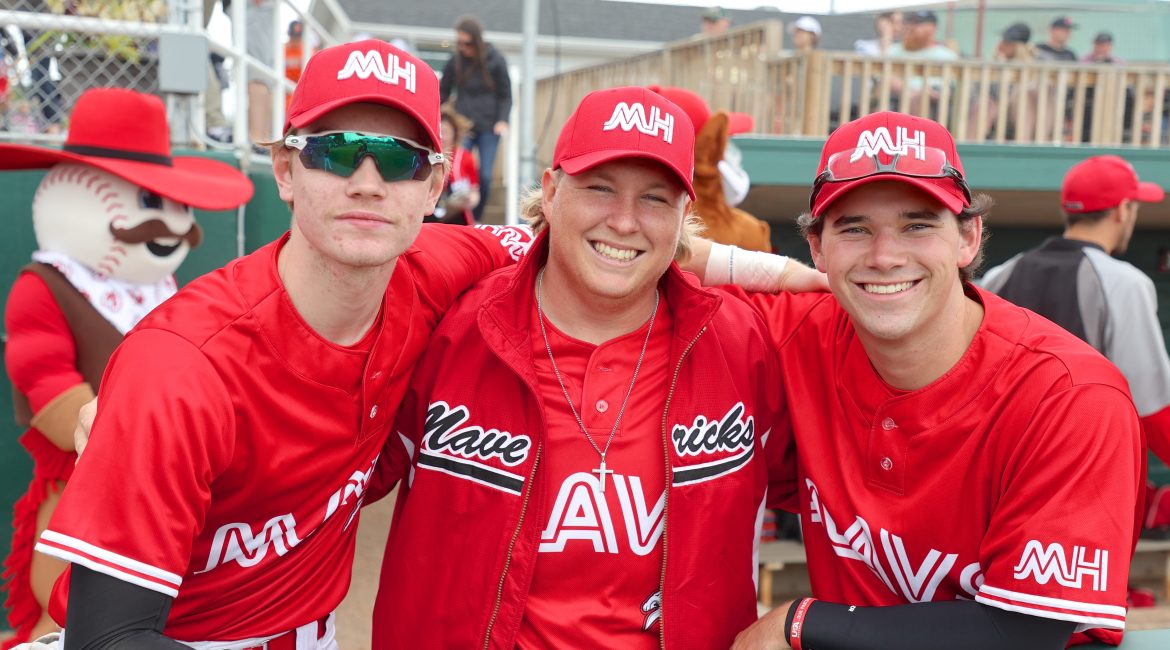 After spending their last five games on the road, the Mavericks returned to their friendly confines and picked up a 10-8 win over the Swift Current 57’s.

The victory snapped the Mavericks five game slide that started on their road trip, including a 10-5 loss Wednesday night in Swift Current that only last five innings due to a weather stoppage.

Mavericks head coach Tyler Jeske said the win was outstanding as they navigate the hot, long days of summer.

“Pregame we talked about, we are in the dog days of summer, yeah everyone’s banged up, yeah everyone’s starting to feel the length of the season, but it really doesn’t matter. If we walked the walk over to the Swift Current dugout, they’re going to say the same thing,” Jeske said. “If you walk into any major league clubhouse this time of year, they’re gonna say the same thing. So message was really, we have another level and when you start peeling back the layers on that, the game doesn’t care. This is where you separate yourself as a baseball player.”

The Mavericks fell behind early as the 57’s scored three runs in the top of the first inning off Mavericks starter Mathew Krall. The deficit didn’t last long as the Mavericks added seven runs over the next four innings to lead Swift Current 7-4.

Third basemen Nate Ade got the offence started with a home run in the second inning, his first of the season. Right fielder David Dell gave the Mavericks their lead with a three RBI triple and scored a pitch later on centre fielder Braden DeSonia’s RBI single.

The Mavericks added to their lead in the third with a RBI hit from left fielder Josh Stark. After Swift Current added a run of their own in the top of the fourth, the Mavericks answered back with a RBI single from Dell, giving him four RBI’s on the game and putting the Mavs ahead 7-4.

Both Swift Current and Mavericks scored in the seventh, with Medicine Hat’s offence coming from an RBI single from catcher Andrew Savage.

There was a break in the play as a rabbit made its way onto the field. The Mavericks players and staff all worked together to try and catch it before they directed it out of a side gate near the dugout. Jeske said he might have to add “rabbit wrangler” to his resume and recounted a similar story from his time in the Dominican Republic.

“That was a new one for me. When I was in the Dominican Republic, we had a peacock delay where a peacock got into left field and we’re playing at the A’s complex, just outside Santo Domingo and a peacock from like a pond in their complex, got out on the field,” Jeske said. “Now the rabbit, he was fast. I was not catching him, I’ll tell you that.”

Nate Ewing took over on the mound in the eighth with two outs after the 57’s had scored two runs to draw within one. Swift Current tied the game on the first pitch Ewing threw before he worked his way out of the inning.

The Mavericks answered back in the bottom of the inning with the bases loaded. Swift Current walked the first two Mavs and after a wild pitch moved the runners up to second and third, DeSonia was then intentionally walked to bring Hunter Cooper to the plate.

The first basemen roped a double into the outfield that scored two runners to put the Mavericks ahead 10-8. Cooper was all smiles after the game and said he was excited going into the at bat after the intentional walk.

“It gets me excited they think we have a better chance to get you out than him and in my head I think, I’m gonna get a hit every at bat,” Cooper said. “I think that I’m better than any pitcher that’s out there, so just it just enhances that even more.”

Ewing worked the ninth inning and secured the Mavericks 10-8 with with a fly out to Dell in right field. The Mavericks closer said he was happy to get the final outs of the game.

“I wish the eighth inning didn’t go the way it did, first pitch was a double and game was tied, so it was kind of rough,” Ewing said. “But, you know, our offence is pretty good. So, put two more runs back on, I felt pretty good after that, being able to shut it down in the ninth.”

The Mavericks (13-23) are back in action Friday in Swift Current for a rematch with the 57’s at Mitchell Field. Jeske said they have to make Thursday’s win, the first of many.

“We need to go get more in bottom line, we have to have our work cut out for us. You don’t  want to catch yourself checking the scoreboard and the standings every night but kind of can’t wait it like the Oreos at 3 a.m.,” Jeske said. “But bottom line, is every win matters. Every win needs to be hard fought and especially last night, where you could tell it was going to be a battle and lightning got into the area. You’re kind of kicking yourself and you’re okay like we need a big response and now we go back there tomorrow and we need to keep building on it.”