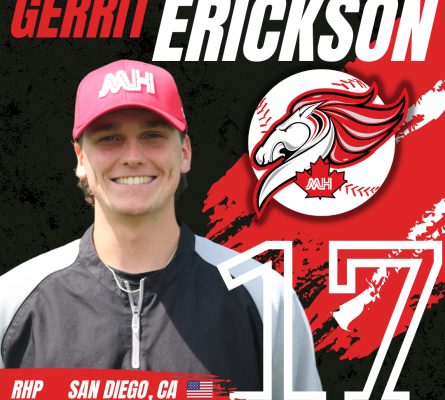 One of six true Wildcat freshmen in 2022…Pre-Chico Days: A 2021 graduate of Westview High School is San Diego…Earned three varsity letters…Helped lead the Wolverines to the 2019 CIF San Diego Section Division I championship…Named to the San Diego Tribune All-Academic Team…Also lettered in football…Personal: Born February 20, 2003, in San Diego…Son of Brian and Lisa…Has two siblings, Evan and Peyton…His dad is his hero (“He is the hardest worker and one of the funniest people I know”)…The person he most admires in the sports world is Kris Bryant (“I have always looked up to him and he is the reason I have been number 17 my entire life”)…His favorite instructor at Chico State is Jessica Eggen…Why he chose to attend Chico State: “I really liked the coaches and the small town atmosphere”…His greatest sports moment is playing baseball in the Dominican Republic in 2014…The most interesting thing he’s ever done is have dinner with former major league All-Star Vince Coleman…The most impressive thing he’s ever accomplished is playing college baseball…Has learned by playing baseball that “if you work hard and put your mind to something, you can achieve anything”…Enjoys fishing, surfing, and golfing when he has some free time…Says surfing is his biggest talent outside of baseball…Has been surfing with professional surfer Rob Machado…At the top of his bucket list: “See the Pyramids of Egypt or swim with sharks”…Best advice ever received came from his dad: “Believe in yourself”…Majoring in criminal justice…Plans to go on and attend law school.